The Challenge - Give development teams the ability to deploy their applications simply and in real-time without giving them administrative access to the destination Windows and Linux servers.

The Solution - A professional Git based deployment system; like that you find on GitHub, Heroku, and other leading cloud services. This solution goes a step further by providing the ability to deploy to Windows servers using Windows domain authentication and WinRM.

The Benefits - Lightning fast, easy to use, secure, reliable, and accurate; no opportunities for accidental installation errors; and with perfect history, easy to snap-back to previous deployments. 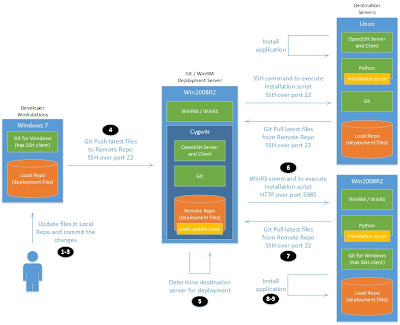 Technologies and their Roles